Order of the Croatian Crown is a nobility and chivalric association that brings together nobles, descendants of nobles, their families and all those who are interested in preserving the tradition of the Croatian nobility and kingdom. The main objective of the Order is to protect the heritage of spiritual and material assets of our ancestors who lived under the crown of the Croatian kingdom. 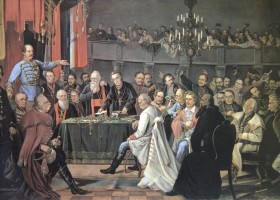 The Order was established in 2012, and since then, it consists of many members of Croatian noble families as well as prominent members of society that preserve the millennial historical and cultural heritage of Croatian kingdom and nobility. The Order of the Croatian Crown has signed agreements on recognition and cooperation with the nobility and monarchist associations of ”Polski Ruch Monarchistyczny” (Polish monarchist movement), ”Magyar nemesi rend mozgalom” (Movement of the Hungarian Nobility) and ”Nobilitas Carpathiae, običanske združine” (Slovakia based Carpathian nobility). We hope on further cooperation with other European monarchist and nobility associations and movements.

Officials of the Order: 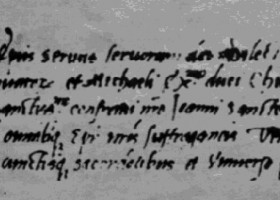 925 – establishment of the Croatian kingdom under king Tomislav Trpimirović

1377 – esteblishment of the Kingdom of Bosnia as an independent kingdom under Croatian dynasties of Kotromanić, Iločki and Hrvatinić

Kiss of peace, oil on canvas by Oton Iveković

9th March 1712 – Croatian pragmatic sanction, by which, Croatian kingdom as an independent legal subject, elected female inheritance right for Maria Theresa on the throne of Croatia

1848 – the Sabor decisions on the unity of Croatian crown lands under the Habsburg dynasty, ending of the union and all ties of the kingdom of Croatia, Dalmatia and Slavonia with the kingdom of Hungary, ending the Tripartitum laws in Slavonia. 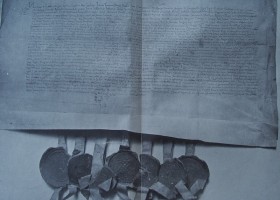 29th October 1868 – Croatian–Hungarian Settlement and the crown union of the Kingdom of Croatia, Dalmatia and Slavonia with the Hungarian kingdom under the Hungarian crown with each kingdom preserving its own legal status, laws and traditions.

28th December 1916 – Croatian coronation oath of King Karl I. (IV.) which considered the kingdom of Croatia, Dalmatia, Slavonia with Rijeka as unified single legal subject under the Hungarian crown.

22nd October 1918 – proclamation of the Lands of Zvonimir’s (Croatian) crown by king Karl I.(IV.) Habsburg-Lothringen and day later by Hungarian representatives as a independent subject from the lands of the Hungarian crown 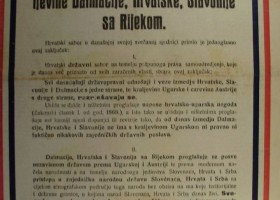 proclamation of unity and independence of the Kingdom of Croatia, Dalmatia and Slavonia with Rijeka

29th October 1918 – proclamation of unity and independence of the Kingdom of Croatia, Dalmatia and Slavonia with Rijeka and ending all ties with Austria and the union with Hungary. Entering of Croatia into the State of SHS, the fact that the Sabor never dethroned king Karl I. Habsburg-Lothringen or acknowledged the union of Croatia (SHS state) with Serbia. 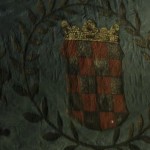 22nd December 1990 – proclamation of the constitution of the Republic of Croatia which is based on establishment of Croatian kingdom and duchies.

The king and the kingdom 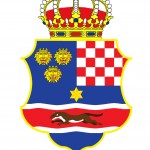 The institution of the Croatian king was established by king Tomislav Trpimirović after uniting the two Croatian duchies into a single kingdom in 925. By law and tradition the king was chosen by seven Bans (six bans where elected from 6 out of 12 Croatian tribes/Noble families, while other six elected the župans) which represented Croatian crown lands in 11 and 12 century, they where the Ban of Croatia, Bosnia, Slavonia, Posiga, Podravija, Albania (in Croatia) and Srijem. The Croatian king had to give a coronation oath and take on the royal regalia which included the crown, sword, scepter and flag, he was then acknowledged by the bans, župans, nobility and clergy. Croatian kingdom didn’t have a capital city, it had a moving court with many capitals, like Knin, Klis, Biograd, Nin… After the personal union of Croatia and Hungary was established, every king had to be crowned separately in Croatia and Hungary. Last separate coronation was the crowning of Ladislaus of Naples that happened on 5th August 1403 in Zadar. The tradition of separate coronation was abandoned, and all kings where crowned with the Hungarian crown. Other laws like the coronation oath and the confirmation of Croatian ban and Sabor (in first nobility) where still present until 1918. During the period of civil wars the Croatian nobility proclaimed the independence of Bosnia which was elevated into a kingdom in 1377. The kingdom lasted until 1477 and included the Kotromanić, Hrvatinić and Iločki dynasties. The dynasties that where crowned and acknowledged as Croatian kings where Trpimirović (925-1091), Svačić (1093-1097), Arpad (1102-1301), Anjou (1301-1409), Luxembourg (1387 – 1440), Jagiellon (1440 – 1444, 1490 – 1526), Korvin (1458 – 1490), Habsburg (1437 – 1457, 1527 – 1780), Habsburg-Lothringen (1780 – 1918) and Savoy (1941 – 1943).

The Ban and the Banovina

The title of Ban represented the highest official and nobility title in the lands of Croatian crown. According to the 12th century Supetar cartulary, in the beginning there where seven bans who where chosen from six out of twelve Croatian tribes/noble families. They could elect the king of Croatia and represent his rule over the lands. First and the highest position in the Croatian kingdom was the title of Ban of Croatia who ruled over Croatia from the Adriatic sea to the Gvozd mountain, second Ban of Bosnia, third Ban of Slavonia, fourth Ban of Posiga, fifth Ban of Podravija, sixth Ban of Albania (in Croatia) and seventh Ban of Srijem. After establishment of the Croatian-Hungarian personal union in 1102, the title of ban of Croatia became the only banal title in Croatia and represented the highest position in the kingdom that held an administrative, judicial and military power. In 13th century, the title of Ban became also a hereditary title which was awarded only to the Šubić family. Later the title was divided into separate titles of Ban of Croatia, Slavonia and Bosnia. In 15th century, the title of Ban of Croatia, Slavonia and Dalmatia became the only and the highest title in the kingdom. During the wars with the Ottomans, another administrative part of Croatia was created, Jajačka banovina and corresponding Ban. The title existed until 20th century and was abolished in 1941, after the fall of Yugoslav kingdom. Through the long history of Croatian Bans some of the most famous were: Dmitar Zvonimir Trpimirović (later king of Croatia), Pavao I. Šubić Bribirski, Nikola IV. Frankapan, Nikola IV. Šubić Zrinski, count Ivan II. Drašković, Toma II. Bakač Erdődy, count Petar IV. Zrinski, Josip count Jelačić Bužimski, Josip Šokčević, Teodor count Pejačević, baron Ivan Škrlec Lomnički, etc.

Nobility titles and hierarchy in Croatia

Kralj (king) – crowned and acknowledged by the Sabor. There are no living kings in Croatia today.

Kraljević (crown prince) – son or a direct pretendent on a title of the Croatian king .

Nasljedni ban (hereditary ban) – hereditary title used in the 13th century. The Šubić family was the only one to use it. 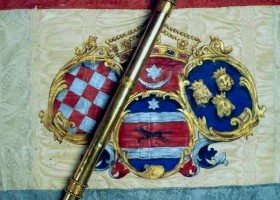 Croatian banal sceptre from 1806 on the banal and state flag

Vojvoda (Duke) – high nobility title that was mainly awarded to royal family members of Croatian-Hungarian kingdom as well as representatives of the king.

Markiz (Marquess) or markgrof (Margrave) is nobility title that was rarely used in Croatia, it was mostly awarded to Austrian nobility.

Grof (count) is a nobility title that was commonly used in the Croatian kingdom. In Croatia-Slavonia the holders of the title where also velikaši (magnates), while in Dalmatia and Bosnia it represented the older nobility. The title of conte, even though it is essentially the same, was never considered the same rank as title of grof.

Vikont (viscount) is a rare title in Croatian Crown Lands. It was mostly used in areas previously occupied by the Republic of Venice. In Hungary it was used only by Köröskényi family.

Barun (baron) is a lower nobility title that was widely used during the later era of the Croatian-Hungarian kings as well as the Habsburg family rule.

Plemeniti (noble) is an adjective added to the family name in forms of ”pl.” (plemeniti), ”von” or ”de” to describe holders of nobility title.

Vitez (knight) is a personal life title mostly awarded with highest state and military orders and decorations. It is not hereditary.